The Rise and Fall of Saint George

You gotta have faith...

George was a pioneer. A trailblazer. An icon. He was our saint.

To celebrate the life of our much-loved star, a beautiful mural appeared across a wall in Sydney’s Inner West. It became a local shrine, bringing a smile to the faces of thousands of commuters who passed every day on the train. It stood for eleven months with no hint of complaint or controversy. The dark forces unleashed and forced upon our community by the Marriage Equality campaign changed that.

One day after we heard YES, a day to celebrate and heal after the divisive campaign, the mural was destroyed in a series of attacks.

Two of Australia’s leading queer artists, pop icon Paul Mac and playwright Lachlan Philpott, have teamed up with director Kate Champion to tell the story of Saint George through the eyes of our community.

The Rise and Fall of Saint George is a celebration of queer achievement, a thank you to the allies who supported us, and an urgent call to arms to never let these hard-won rights go in these dark times. 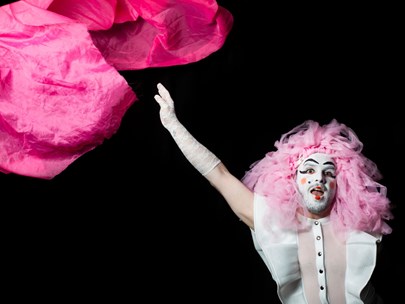