Since its inauguration in 2019 the Homophonic! Pride Prize has quickly established itself as an important award in the society of Australian Composers. With finalists selected from across the country, the 2023 winner will receive a commission of $2,500 to compose a work in collaboration with Ben Opie, and a premiere performance at the next Homophonic! in Midsumma Festival.

Championing LGBTIQ+ composers, and bringing the disco ball to the concert hall!

Led by Artistic Director Miranda Hill, Homophonic! is a leading voice in queer classical music since 2011.
Through performance, regional touring, commissioning, the Homophonic! Pride Prize Composition Competition and the RESPECT project telling the stories of LGBTIQA+ elders in music.

Submissions for the 2023 Homophonic! Pride Prize: The Composer Award have now closed.

Homophonic! is a magically unique experience which produces nothing less than a musical utopia. It features all Australian composers and illuminates the diversity of the collective musical voice. It’s a yearly celebration of new music written by queer composers. 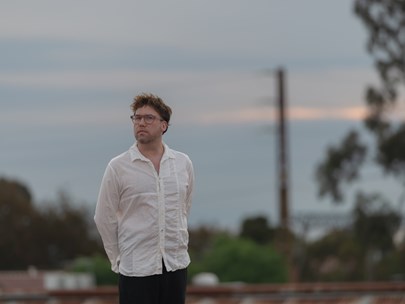 "I’m thrilled to be this year’s recipient of the Homophonic Pride Prize! Ben and I will creatively explore how instrumental performance can be fetishized through focusing on unwanted and excessive sounds, using sound in gay pornography as a key influence."

James Rushford is an Australian composer-performer, whose work draws from concrète, improvised, avant-garde and collagist musical languages, staking out an idiosyncratic stylistic space that has been described as ‘electro-acoustic experimentation with a beating heart’ (Boomkat) and ‘haunted Jacobean ASMR’ (The Wire). Investigating the creases, cracks, and folds in traditions ranging from early music to new age, Rushford’s work subtly exaggerates seemingly liminal aspects such as atmosphere and the bodily presence of the performer until these take on a weight equal to musical elements such as pitch, rhythm and timbre.

His music has been published by a variety of international labels including Unseen Worlds (US), Pogus (US), Penultimate Press (UK), Another Timbre (UK), Holidays (IT), Black Truffle (AUS), KYE (US) and Shelter Press (Fr).

In 2017, James completed a Doctorate from the California Institute of the Arts.