Midsumma Pride March will return on 6 February 2022. More details about that will be posted here shortly.

Australia’s LGBTQIA+ arts and cultural experience, Midsumma Festival, brings Midsumma Pride March to Fitzroy Street, St Kilda every year, in a display of pride and solidarity. Pride March 2021 premiered a livestream of the march on YouTube, showcasing exclusive performances and never before seen footage of the first ever Pride March in Victoria.

To ensure the event could proceed in a COVIDsafe capacity, meeting the Victorian Government’s requirements, in 2021 Midsumma encouraged audiences to attend and view the march in one of three ways – either by booking into a hospitality venue on Fitzroy Street, St Kilda to watch the parade from 11am, or by viewing the parade from a registered viewing party venue or from the comfort of their own home via the livestream of Midsumma Pride March available from the Midsumma Facebook page or YouTube page from 10:45am.

The march itself was led by Boon Wurrung Elders and a beautiful Rainbow Aboriginal contingent and followed by 240 separate marching groups made up of diverse communities, pride organisations and allies.

The live stream was hosted by Sarah Ward, the multi-award winning, powerhouse and performer (known as Yana Alana), and Community Darling and busy homosexual Dean Arcuri; plus our on-ground commentator was comedian, radio host, actor and celebrant - Annie Louey. The livestream also showcased performances by drag performer Olympia Bukkakis; He’s Every Woman stars Justin and Jamie performing ABBAlicious; Georgie Munroe performing an original composition; Elvin Lam: performing 'I Am What I Am' with support from Marc Ethan, Auslan Interpreter; and Variation Three performed a dance composition to activate Catani Gardens. To pay homage to our histories, Midsumma Pride March Livestream also showed exclusive video footage of the first-ever Pride March in Victoria in 1996.

To view Midsumma Pride March, audiences were encouraged to:

The livestream was also available at: facebook.com/midsumma

Midsumma also provided an Audio Described version of the livestream. This AUDIO DESCRIPTION was presented by Midsumma and Description Victoria.

Midsumma held a private event for pre-registered marchers in Catani Gardens after the March. This was not accessible for the general public to attend (as per our COVIDSafe event plan).

This event operated in accordance with the Victorian Government COVIDSafe guidance to make sure we were doing our part to be COVIDSafe. We wanted everyone to be able to enjoy Midsumma Festival 2021 and keep themselves safe at all of our events.

Midsumma Festival 2021 was delivered under a COVIDSafe plan. Our COVIDSafe plan was reviewed and updated to align with the changing situation, and attendees were updated with information as it evolved.

Find out how you can stay COVIDSafe at Midsumma Festival 2021

Midsumma has a COVIDSafe Plan whose objectives are to document how Midsumma will operate in a COVIDSafe way, including the various requirements and procedures put in place for running COVIDSafe events.

As the COVID-19 situation changes, the plan is updated to incorporate new evidence-based information disseminated from the state and federal government, which may affect the protocols and procedures listed. Each time the plan is updated, all inducted staff will receive a new briefing from senior Midsumma staff to ensure compliance with any updated or reviewed procedures.

The COVIDSafe Plan is intended to supplement, not replace, the normal Risk Assessment and Emergency Management Plans for each participating venue or event.

The key aspects of the Midsumma COVID-Safe Plan are:

The Midsumma COVIDSafe Artist Management protocol includes guidelines on communicating COVIDSafe requirements to artists. This covers agreements, induction and accreditation/authorisation mechanisms to both minimise contacts and facilitate contact tracing should that be needed.

It also includes site and venue-specific protocols to maximise physical distancing, outline cleaning and disinfection requirements and the use of hand sanitiser and other health-related mechanisms that will be put in place.

Pre-event attendee communications will be designed to further the awareness of COVID-19 and COVIDSafe practices put in place at Midsumma events, venues and operations.

*Data for record keeping requirements will only be stored for the required time (currently 28 days), after which time it will be securely deleted. The data will only be made available to Victoria's Department of Health and Human Services if requested.

What is Midsumma Pride March?

Keep up to date with Midsumma COVID-19 Updates

Midsumma Pride March is one of our signature events, where over 7,400 marchers usually take to the streets down Fitzroy Street in St Kilda each year and over 45,000 people line the streets and balconies along the march route to show their support – making this the best-attended Pride March in Victoria. In terms of scale, march numbers for Midsumma Pride March are considerably larger than other annual marches held in Victoria including Moomba and the Australia Day March.

Dykes on Bikes precede the marching contingent as per tradition, with the march itself led by Boon Wurrung Elders and a Rainbow Aboriginal Float along with the Premier of Victoria, Minister for Equality and the Creative Industries and Commissioner for Gender and Sexuality.

Hundreds of young people, often amongst the most vulnerable within our communities, are placed towards the front of the march as a positive and strong affirmation for LGBTIQA+ youth.

The Midsumma Pride March Awards encourage colourful and innovative contributions from March participants and is judged by selected members of the community.

At the conclusion of the march, attendees are led into Catani Gardens for celebrations and entertainment including DJs and live performances.

After their inception in 2017, the Midsumma Pride March Awards will be back in 2021.

The awards are intended to encourage a bright and meaningful presence from participants. Winners are selected by a panel of diverse community representatives and announced at the post-Pride Celebrations.

★ Peter Dewildt Award - Most Significant Message - awarded to the group with a timely and well-conveyed message. This award honours the memory of Peter Dewildt, Pride March Victoria's first president, who passed in 2019: Parents of Gender Diverse Children
★ Most Fabulous - awarded to the most fantastically-frocked group: Rainbow LARP (Live Action Role Play)
★ Most Innovative - awarded to the cleverest group in the march: Pacific Essence

Marchers' Assembly: The Ian Johnson Oval on the corner of Lakeside Drive and Fitzroy Street.

Vehicle Assembly: Lakeside Drive (next to the Ian Johnson Oval). The 26th Pride March will take place in St Kilda on 23 May 2021, though the number of participants will be capped at 8,000 and crowds are asked to book in to a Fitzroy St venue or watch the live-stream of it due to COVID-19.

Midsumma Pride March is about affirming that we’re fabulous, and we’re loved, and we’re diverse and we’re proud. We march in solidarity for those who can not. 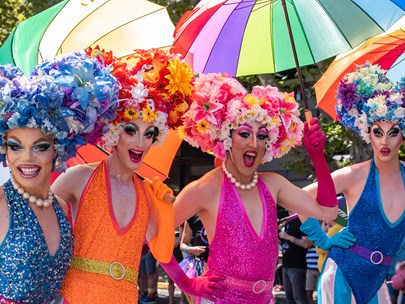